"Now, ensign, the job of lookout is very important to the smooth operation of this vessel."

"You must quickly alert us to any possible danger-- but you must also remain calm at all times."

"We are professionals here; panic is not part of our training."

"Now, relax, ensign-- let me have a look at those glasses. Remember-- we professionals are always calm. You could be hallucinating, you know-- that's a pretty serious matter... hard to imagine... why, great balls of fire! It is a guitar! Navigator! Helmsman! Full speed! 180-degree turn! That's an order! Now!"

The first stop on today's itinerary was a parish about twenty-five minutes from here by car. Without any additional information, I thought I'd take a crack at the 10:00 AM Mass and hope for the best. I entered at about 9:45 or so and waited anxiously. I saw a flute on a seat near the organ and piano and thought to myself that it would go nicely with the organ, but probably... Soon afterward, a guitar appeared, so I beat a hasty retreat to the car. Sometimes, having the car is nice, as much as I hate to burn gasoline. It will probably be 8:30 AM or 11:30 AM at that parish.

With the car ready to roll, I headed for an adjacent parish with a 10:30 AM Mass. It is a tiny, simple building in a wooded area. The outside is tan or what is typically called "ivory" vinyl siding on the sides and similarly-painted cement in the front. After arriving at about 10:20 AM, I looked for a cornerstone but was not able to locate one. My guess is that this is a pre-Vatican II building that has been slightly renovated, but I could be wrong. I saw everyone else entering either through two side entrances adjacent to the parking lot or a larger "jubilee" entrance at the rear, so I tried to enter via a door on the other side of the building adjacent to the property line. This door was locked-- on a Sunday at that. Harrumph. Being countercultural is so tough these days.

After shamefacedly buckling and using the same doors that everyone else was using, I found a seat at the center of a pew to the right towards the rear. The dark, wooden pews hold only six across (maybe seven on Easter) and are split into two sections of about twenty rows each by a center aisle and flanked by side aisles. The high, peaked ceiling is white with dark, wooden trusswork, and the walls are similarly white with some dark trim. The rear wall of the sanctuary is of light, wooden planking and holds a larger-than-life crucifix of what appears to be a writhing Christ. The tabernacle is rather tiny and square and is on the right side of that wall, possibly lower than the altar. The ambo, at the left and ahead of the altar, is a simple but dignified black block with a gold cross on the front. The choir serves from a niche at the right front of the church, where a piano and organ are located. Today, about half a dozen people were in the choir. A mostly glass wall separates the vestibule, in the rear, from the pews. The OCP combination of Today's Missal and Music Issue was found in the usual blue binders, here stacked in the pews next to the aisles.

First, the cantor/choir leader welcomed us and read more than half a dozen lengthy announcements, most of which were in the bulletin. He then announced the opening hymn, "Alleluia, Sing to Jesus." Three servers, four lay ministers of Holy Communion, a reader, and the priest formed the opening procession, which did not begin until after the first verse of the hymn was complete. The entire hymn was sung. The priest introduced Form C of the penitential rite, the invocations of which were led by the cantor. The responses included the Greek "Kyrie, eleison" and "Christe, eleison." Then we sang the Gloria to Peter Jones' arrangement. Unlike the interpretation I heard on Easter Sunday, this one was very fast-- faster than usual in fact. The organ may have been a keyboard, actually, as it sounded a bit different for this. Members of the choir took turns with the cantor's part in this Gloria. In any case, this wasn't a bad start at all.

The reader approached the ambo and gave the first reading as it appears in the missalette. Then the cantor led the psalm for the day from behind the organ. This was followed by the second reading, after which the reader returned to a place in the pews. The cantor led the verse before the Gospel as the priest went to the ambo to proclaim the Gospel. His homily basically reiterated the points made in the readings, particularly that Jesus physical body was resurrected. He also made clear that Jesus' real body is present in the Eucharist, and that we must show our faith through our actions, or else we are showing a contradiction in ourselves between our faith and our actions.

We recited the Creed, and then the Prayer of the Faithful was offered, with the cantor leading the response ("Risen Jesus, hear our prayer") as the reader read the petitions from the ambo. A collection was taken using handleless wicker baskets passed across the pews by those in the congregation. The offertory hymn was "We Walk By Faith;" the entire hymn was sung once, and then the second verse was repeated as well to "cover" the preparation of the gifts. The chalice and ciboriums were of metal.

The Sanctus was from Bernadette Farrell's Mass of Hope. The priest offered the third Eucharistic Prayer. We sang the third Memorial Acclamation, which along with the Great Amen also came from the Mass of Hope.

The Our Father was sung to the most common setting. Almost everyone joined hands, but apparently a simple trick may have spared me. I simply held the missalette and hymnal in my hands throughout the Mass (which was not obviously offensive or odd as I was at the center of a filled pew that had no book racks). Those next to me must have realized that if I tried to join hands, the book would go crashing to the floor in rather an awkward way. Fortunately, they were bright enough to spot this-- not everyone would have been able to reason that quickly and accurately.

The Agnus Dei was sung to a setting unfamiliar to me and not easily identifiable from the hymnal. The four lay ministers assisted the priest in the distribution of Holy Communion. The priest stood in the center, accepting communicants from either of the two lines, and two lay ministers stood on either side of him. Behind the priest, near the altar, the other two lay ministers offered the chalice. That is probably the only way to do it at this parish; the piano is otherwise in the way on the right where a minister more typically offers the chalice. The Communion hymn was "Seed Scattered and Sown."

The priest then offered the Prayer after Communion and imparted a blessing using the Prayer over the People format. The cantor gave two additional announcements, including one about a blood drive, before announcing the final hymn, "Jesus Christ Is Risen Today." The closing procession, including all those from the opening procession, passed through the center aisle.

"I want all those missalettes and hymnals removed. Now."

"One guy got out of joining hands by clinging to his book. Not tolerable."

"Sing 'Mary Had a Little Lamb' if you have to. But no more hymnals!" 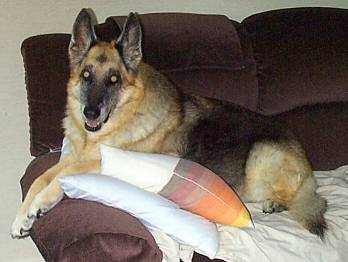 I often blame Kevin Koster for inspiring these musings, but actually, that's only part of the story. Since 1987, one of my responsibilities was to mind my sister's German shepherd Tanqueray any time she and her husband were away. This often included Sundays; since they live over an hour away by car, I would attend Mass near their home when I was staying at their house. For a time, I simply attended at their local parish or another nearby parish, but after a while, I decided that I found something interesting about trying different parishes, and their parish church is kind of small too. I also wondered if I could find a choir as good as the one at my own parish. So I actually found myself looking forward to trying a new parish any time I was minding Tanqueray (as much as I like my own parish choir Mass). By the time my parish initiated the "introduction" before Mass, I was actually rather experienced in sampling parishes.

Moreover, in the last several months, as I found steady work during the week, and Tanqueray's health started to deteriorate, these weekly parish visits gave me an excuse to try another parish somewhere in the general direction of my sister's house while at the same time making time to visit my favorite dog on Sundays. It actually has been working rather well; last week, I even wrote and filed the article from their house.

Thursday marked the end of Tanqueray's time here on Earth. What God holds in store for mere animals outside of this life we do not know with any certainty; I can only pray that He give her the highest reward He has for an animal without an immortal soul. She was a faithful friend, always ready to cheer me up after a particularly bad example of liturgy and a joy to find waiting for me even after a well-done Mass. I like to think that Cardinal O'Connor found his way to heaven and told God, "The one thing I missed as a priest was being able to own a pet; could you get me the best dog you can find?" That dog would have been Tanqueray, a loyal and dedicated friend who will be missed.