Today, we visit a small, Polish parish about a half an hour by car from where I live. The Mass schedule I had from last July showed a 9:00 AM Mass and a 10:00 AM Mass in English; the Masses immediately before and after that were both in Polish. I decided that the 9:00 AM Mass would be the smartest plan-- on the off chance that it had guitars, I could wander about the area for a while and return for the 10 AM Mass.

I arrived at about 8:55 AM and was surprised to find a parking place on the street right next to the church; this church has almost no parking of its own. I then went inside and discovered an empty church. Zing! Despite my diligence in collecting bulletins, this parish appears to have changed its Mass schedule slightly. I looked at a bulletin and saw that, although the boilerplate on the cover had not been changed, the inside, showing the intentions for the week, did reflect the elimination of one of the two English Masses I had considered. Instead of a 9 and a 10, now the parish has a 9:30 AM Mass. What to do? I drove to two other local parishes to pass the time and grab bulletins. The first had a 9:00 AM Mass that was just beginning. Although it says, "family Mass third Sunday of the month," today I heard organ music. Good. Then I visited the other parish in that hamlet, which also had a 9:00 AM Mass. The church was closed for extensive renovation (boarded windows); in the school auditorium, a folk group was singing the Alleluia. One for two on music; oh for two on bulletins (both parishes had them well-hidden).

I returned to the Polish parish a little before 9:25 AM. I actually was fortunate enough to get the same parking space again, so I parked there and headed inside. The building bears a 1903 cornerstone and has seen little renovation. The inside is rather simple, with white walls and ceiling supported by dark wood beams. A small insignia of some sort is painted on the peaked ceiling in each section. The sanctuary looks like 1903 vintage, with a large, traditional crucifix integrated into a wooden canopy framework surrounding the tabernacle. A freestanding marble altar has a painted sculpture of the Last Supper, much like the Polish parish of week 22. Statues of Mary and Joseph are in the usual niches at the left and right of the sanctuary. Arched, stained-glass windows depict various saints. The wooden pews are arranged conventionally, in two groups separated by a side aisle and lined with side aisles. Each pew can hold about eight people. Forlorn hat hooks hang on the backs of the pews, anticipating an era when the objects of their desire return to style. The sacristy has a sign over it reading "confession room," along with the customary lights; it apparently doubles as a face-to-face confessional as an alternative to renovating the two standard confessionals at either side of the church.

I looked at the hymn board and started writing the names of the hymns, scratching my head as I did so, as all four hymns were Christmas carols. Either the board had not been updated, or someone just can't let go of Christmas. The latter was the case; when the reader emerged and took the lectern on the right, she announced at once all four hymns, which matched those posted on the board. She also read several announcements before ceding the floor to the organist, who served from the choir loft and apparently was doubling as cantor. The opening hymn was "God Rest You Merry, Gentlemen." A server, an adult acolyte, a lay minister of Holy Communion, and the priest walked from the sacristy on the right to the altar and took their places. The priest began by going to the ambo; he read a brief exhortation on the passage into Ordinary Time, which made the leftover Christmas carols seem even stranger still. He then led the Confiteor, which was followed by a sung Kyrie in English and a recited Gloria.

The reader went to the lectern on the right (as I recall) and proclaimed the first reading as it appeared in the Paluch Seasonal Missalette. The organist then led the psalm for the day, which was followed by the second reading, offered by the same reader as before. The Alleluia verse was sung before the priest went to the ambo to proclaim the Gospel. The words differed slightly (but harmlessly) from those in the missalette, so I presume that he was using an old Book of Gospels.

Before the homily, the priest made mention of the March for Life next Monday, saying that he would be on the bus with others from that and a neighboring parish. He also made note of the start of this year's Bishop's Annual Appeal and asked for the parishioners' support. He paused for a few moments before actually beginning the homily, which was noticeable, as his style was otherwise rather rapid-fire. The homily began with a note that an article in Time magazine had suggested that this was an "generation of extremes." The priest then gave several examples of this, mentioning among other things people with pierced noses and who knows what else. I think he somehow got to the point that following Jesus is an extreme measure that we have to be willing to undertake, but I had a bit of trouble following things. I may have lost my attention for a moment, and since he was going so fast, I might have missed the sentence or two that would have tied everything together so that I could have taken it with me. Instead, I guess the various points spilled all over the streets as I made my way home.

The Creed was recited, and then the Prayer of the Faithful was offered. A collection was taken using long-handled wicker baskets as the offertory hymn, "It Came Upon a Midnight Clear," was sung, mostly by the cantor as participation was poor for this and all the sung parts of the Mass. (The priest tried to jump-start the congregation at times by singing loudly himself, but this helped little.) The chalice and ciborium were of metal. The Sanctus, Memorial Acclamation, Great Amen, and Agnus Dei were sung to settings I am unable to identify, although the Sanctus sounded familiar to me. The priest used the second Eucharistic Prayer; the server sounded the bells at the consecration, which also happened to coincide with the ringing of the church bells at 10 AM, providing an interesting effect. A notable addition to the latter part of the prayer was an intercession for those "who had recently lost a loved one" or something like that.

The Our Father was recited, and I noticed no joining of hands, although the small church was almost full. (I suspect the two Masses that were combined may have been sparsely attended by comparison.) At Communion, a lay minister left the pews to assist in the distribution, which looked odd to me as the other lay minister was seated in the sanctuary. She retrieved two ciboriums from the tabernacle even though the priest was standing directly in front of it. Two stations were located in the front of the center aisle, and one station was located at the rear of the church. In the front, the server and acolyte held patens to catch any fallen Hosts. Instead of waiting for the line in the aisle to clear for the rear station, people stepped into the aisle and walked back several rows, which was rather awkward at best. (I think I'd eliminate the rear station.) The chalice was not offered. The Communion hymn was "O Little Town of Bethlehem."

After Communion, the congregation recited a "Responsory during Winter" printed in the back of the missalette; this verse is based on Psalm 147. (Yes, even in week 65, we see something entirely new.) Then the priest offered the Prayer After Communion and a simple blessing. The closing hymn was "Angels We Have Heard on High." The closing procession returned directly to the sacristy. Although two verses of the hymn were sung, most people departed as the first verse was concluding.

Then, it was time to scout other parishes. At the first, I arrived between Masses upstairs and obtained no useful information apart from a bulletin. Downstairs, a homily was in progress, so I'd have to wait ten minutes to hear music. At the second, upstairs the consecration was in progress, and I heard an organ and a pleasant-sounding male cantor-- good possibility for a future visit. I looked for a bulletin but saw none. Downstairs was the folk Mass. One for two again. Well, at least people have a choice at 10 AM there. Then I went back upstairs and saw an usher placing bulletins on tables in the vestibule. Why, thanks very much-- just what I needed!

"Changing the Mass schedule on that guy today was really fun, wasn't it?"

"I was lucky to hear that rumor that he was coming today."

"Did you see the look on his face when he saw the empty church?"

"That was a real scream!"

"Calling all the parishioners last night was a big chore, but it was well worth it."

"That extra money we paid for the revised bulletins wasn't too much, either, and I didn't mind driving to get them."

"I forgot to have the boilerplate changed on the cover, but that just made him even more puzzled. I almost died laughing while he studied it!"

"When you get that picture of him in the vestibule developed, I want to frame it."

"Absolutely! I'll have a good laugh every time I look at it."

"I wonder where he'll go next week?" 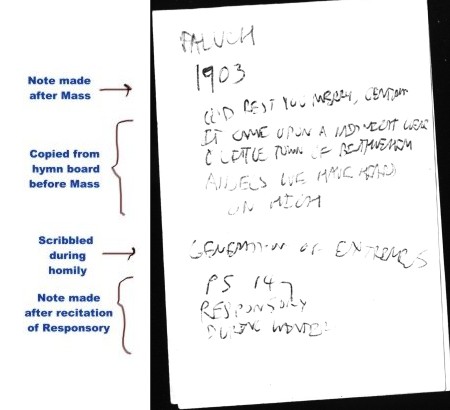 The actual scrap of paper used for this week's notes.